The Tobaru Project comprises four (4) contiguous Prospecting Rights blocks (1,347 Ha) near the town of Kuma in southern Kuyshu. The project area contains attributes of both an exposed high-sulphidation epithermal (“HSE”) alteration lithocap and low sulphidation epithermal (“LSE”) event, the former being delineated in the 1980’s and 1990’s by the Mitsui - BHP Joint Venture.

No known historical data exists for the Tobaru mine workings, however there are reports that describe the larger Fuke mine situated immediately west of the property.

Late 1980’s to early 1990’s: A partnership between Mitsui Mining & Smelting Company and BHP-Utah Japan Inc. explored the Tobaru area. As part of this exploration program a Masters study focusing on the Tobaru alteration was undertaken (2Hamilton, 1993). The study describes a northeast oriented 1,500 by 700 metre zone of silicification and quartz veining that includes pockets of advanced argillic alteration. The central silicified zone is enveloped by argillic and propylitic alteration outwards, which are bound by steeply dipping fractures. X-ray diffraction indicated the presence of pyrophyllite, tourmaline and quartz in silicified rocks, illite and smectite in argillized rocks and chlorite in propylitized rocks.

A single drillhole (DDHT1) was drilled to the south of the main alteration zone is referenced by 2Hamilton (1993), but no other public data on drilling has been sourced to date.

Geology of the Tobaru Property is comprised of the Hokusatsu Andesite Formation and overlying Yamano Rhyolite (2Hamilton, 1993). The early Pleistocene-aged Hokusatsu andesite consists of subvolcanic intrusives, dykes and sills with a possible upper lava flow member. All known HSE and LSE vein mineralization is hosted by this unit.

The younger Yamano Rhyolite is moderately to intensely altered in the project area with no fresh samples sighted (Hamilton, 1993).  Relict textural features suggest a felsic composition that is porphyritic with feldspar phenocrysts in a fine-grained glassy matrix.

The Au mine deposits found within and in proximity to the Tobaru property are classified as rift low-sulphidation epithermal.

The Fuke mine, adjacent to the Property, was developed over more than ten known Au bearing quartz veins that were categorized into the following two types (3Muto, 1952):

Veins were described as hosting pyrite, chalcopyrite, sphalerite, galena, hematite, electrum and argentite (4Watanabe, 2005) and are primarily hosted by the Hokusatsu andesite. 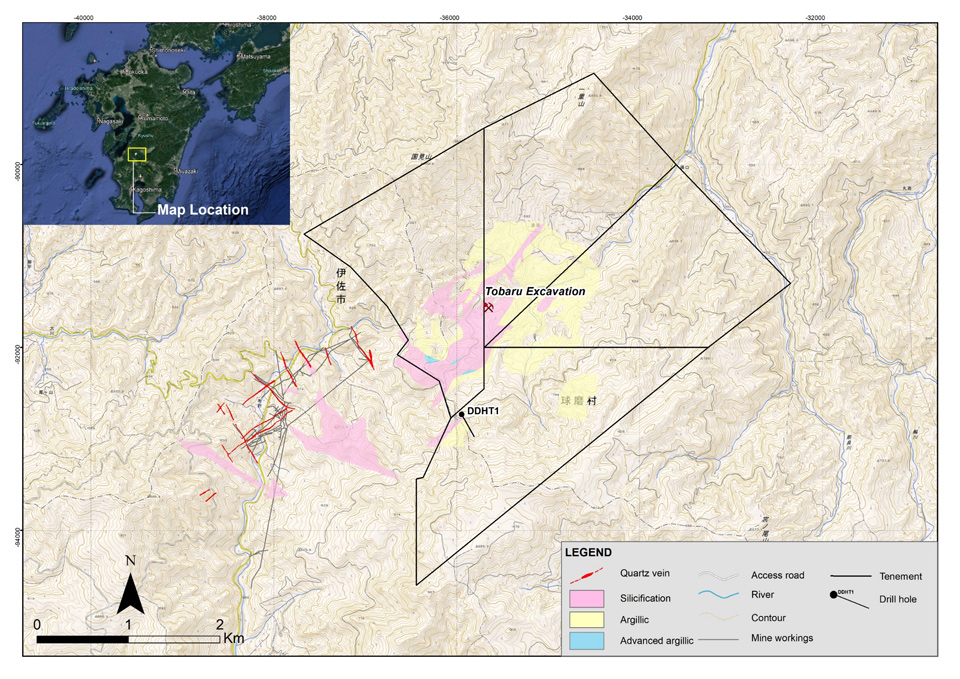 A WNW-SSE structural control on the Tobaru alteration zone is inferred from its elongated orientation and steeply-dipping bounding fractures.

The Company to date has conducted reconnaissance traverses, literature reviews and data searches on the property. The results of these efforts have been compiled to a GIS database.

The Tobaru project is located within the highly gold endowed Hokusatsu-Kushikino mining district, in the northern part of the Southern Kyushu Epithermal Gold Province. In excess of 10 million ounces of gold has been produced from high grade epithermal deposits of the district. Notable gold producers within the district include: the Hishikari mine with 7.4 million ounces produced to date at average grades of 30-40 g/t6; Kushikino mine, 1.8 million ounces at 6.7 g/t; Yamagano mine, 910,000 ounces at 17.4 g/t; and the Ohkuchi mine with 714,000 ounces at 13.6 g/t4,7 .

Due to the high prospectivity of the district, the potential for both low and high-sulphidation and porphyry mineralisation related to advanced argillic alteration the company believes this area is worthy of more detailed exploration. The Company will seek to define the limits of the alteration system by building on the existing data with detailed surface mapping, geochemical-sampling and geophysics to target scout drilling.