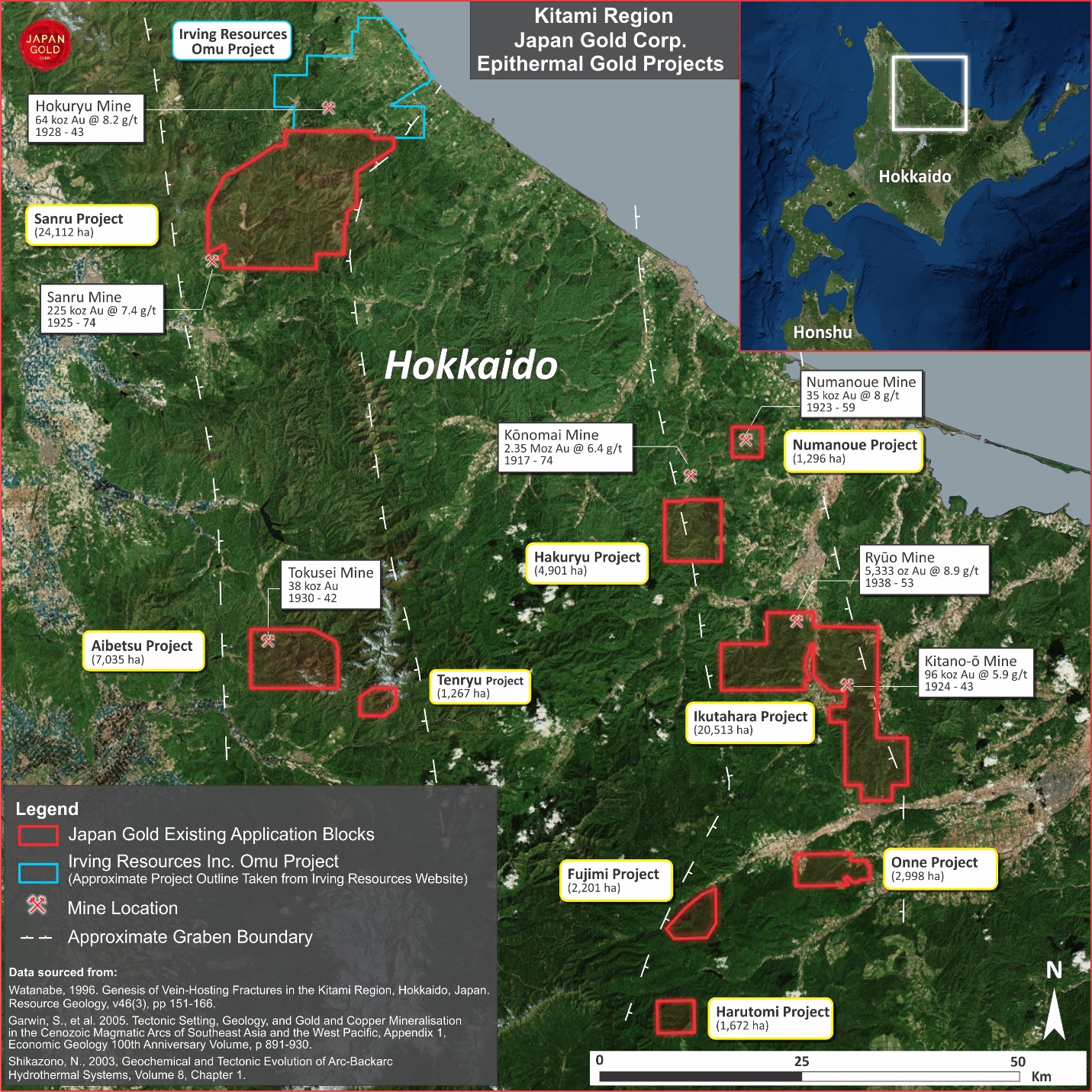 The Sanru vein outcrop located about 500 m west of the project boundary was discovered in 1917 by local prospectors. Six Au-Ag mine workings are recorded on the government geological survey maps covering the project area. Production (1925-83) from the Sanru vein system located just off the western edge of the project totals 190 Koz of gold, at an average grade of 7.3 g/t Au,  and 1.09 Moz of silver, at an average grade of 42 g/t Ag¹. A government moratorium on mining lead to the closure of the mine in 1943.

More recent exploration was undertaken by the Australian company, Austpac Gold N.L. from 1989 to 19942, and in the late 1990’s by the MMAJ3 as part of a regional metallogenic study which included regional geophysical surveys and drainage sediment sampling.  A MMAJ gravity survey mapped northeast Hokkaido in detail with a survey station spacing of about 700 m. Processing of the raw data defined numerous basin and caldera features that are spatially associated with district epithermal mineralization. Austpac identified two prospects along strike from the Sanru mine in the vicinity of the Jugosen-zawa workings, which lie within the current Sanru Project. Due to dwindling exploration funds and an appreciating yen, no further work took place at the this time, and the land was ultimately relinquished.

Systematic regional drainage sampling by the MMAJ was undertaken in 1997 across the current Sanru license extents.  Data for four elements (Au, As, Hg, Cu) from more than 70 sample sites within the project area have been obtained by Japan Gold. These indicate five major areas of coincident gold-arsenic anomalies3 (note the raw analytical data upon which published geochemical maps are based is not available).

Three areas (Bifuka, Piyashiri and Monsanru) highlighted in the drainage survey were followed up with further work in 1998, which consisted of geological mapping and soil sampling. A siliceous zone discovered in the northeastern portions of the project area returned low-level gold anomalies along a northeasterly trend based on MMAJ data (soil geochemical maps). No follow-up work on this anomaly was attempted at the time.

The gold mineralization styles within the Sanru Project are classified as rift-related, low-sulfidation epithermal. Mineralization is typically associated with quartz-chalcedony-adularia-sericite±calcite in silicified and veined- or brecciated-structures, including dark sulfidic material, termed ginguro bands. The Sanru mine, located immediately west of the project area, is hosted within the Miocene Sanru sedimentary sequence that is interpreted to be contemporaneous with rhyolite lava prevalent in the project area.

The Sanru deposit, located just outside Japan Gold’s tenement, occurs at an east-west flexure along an east-northeast-trending dextral fault which extends into the application area towards the historic Jugosenzawa mine workings.  The major Honpi vein dips 50° towards the southeast with rhyolite breccia in the footwall and black shale in the hangingwall. Bonanza grade ore-shoots typically occur at bends in the vein, with six such zones mined and recorded with dimensions of up to 200 m length and 30 m width.  The Juji-hi vein strikes perpendicular to the main trend and is reported to have produced the highest average grades in the mine (25 g/t Au) over a vertical extent of about 90 m1 (the raw data upon which these gold values and dimensions are based is unavailable).

Japan Gold’s Sanru Project covers a total of five known mine workings that are inferred to be fault-controlled with potential to host similar mineralisation as exploited in the Sanru Mine.

The Company has completed a compilation of published exploration data and historical mining data for the Sanru Project. No field work has yet been undertaken on the Sanru Project by Japan Gold. Historical exploration and mining data have been sourced from many entities including the MMAJ and Japanese universities, along with published technical papers by Japanese nationals and/or foreigners. Where appropriate, Japanese text documents were translated by a sworn translator. To advance the Project, the Company plans to commence regional multi-element stream sediment and BLEG (Bulk Leach Extractable Gold) geochemical surveys, geological mapping and rock-chip sampling, ground follow-up of anomalies and an investigation of other recorded historic workings.

The Sanru Project extends approximately 13 km northeast along trend from the Sanru mine, one of the largest production sites of gold in the region.  The project area has received little modern exploration with MMAJ stream sediment and soil sampling the only major work carried out to date. Five historic mine workings are located within the tenement, including three clustered in the central part of the licence that are aligned east-west.  The easternmost of these, the Mosanru mine workings, are described as characterized by an east-west trending vein.  This zone may represent a flexure of a mineralized fault then it may be of a favorable orientation for dilation and potential bonanza grades, as present at the Sanru mine.

Rhyolitic lava covers much of the project area and is considered prospective as a lateral equivalent to the Sanru mine host rocks. The five zones of anomalous gold and arsenic in stream sediment samples defined by the MMAJ’s exploration work indicate a similar signature to that present across the Sanru mine area. Localized follow-up soil sampling results show a northeasterly trend of low-level gold-in-soil anomalies that are associated with a zone of silicification in the eastern part of the area.

The Sanru Project warrants the application of modern exploration techniques and target concepts. The northeasterly projection of the gold-rich Sanru host structure into the Sanru tenement presents an  encouraging exploration target for bonanza-type epithermal gold-silver veins.

Japan Gold has proposed a two-stage exploration program at Sanru. Initial low-impact mapping and sampling along the continuation of the Sanru mine structure, followed by scout drill testing.

1 METI (formerly known as MITI), 1990. The Report of Geological Structure Survey of Mineral Deposits of B Area in Northern Hokkaido”. The Agency of Natural Resources and Energy of MITI, March 1990.