There is no history of mining reported for the Minamikayabe application area. Several quartz-barite-sulfide mineral vein occurrences occur within 1-2 km of the tenement. Prior interest in the mineral potential of the Kameda Peninsula followed the discovery of gold precipitates in the active hot springs of the Osorezan geothermal field on Shimokita Peninsula in northern Honshu by the MMAJ in 1988. Osorezan is located about 65 km south of Minamikayabe.

The MMAJ undertook geological- and metallogenic-studies in the Kameda Peninsula during the 1990’s. This work included detailed geological mapping, petrological studies, radiometric age dating and limited scout diamond drilling, and was the first study to define the distribution and character of two major AAA lithocap occurrences at Minamikayabe and on SAMJ’s nearby Kobui tenement area. The two lithocaps at Minamikayabe are known as Mitsumoriyama in the western part of the project and Nukeishi in the northeast.

During this program, two diamond holes were drilled in the Minamikayabe area. One hole tested the western lithocap (Mitsumoriyama) and intersected a 300-m thick zoned advanced argillic body comprising alunite, vuggy-silica and associated high-temperature minerals. Quartz veins distributed across the advanced argillic zone between 0.1 to 6cm wide gave gold values between 1 and 2 ppm, highlighting, the potential for a disseminated, bulk-tonnage gold resource in the lithocap. The collar of this hole is located within a few hundred meters, but outside, of the project boundary.

The second drill hole tested the Hokko-Minami epithermal veins within the tenement, about 1.5 km east of the western lithocap, and returned an intercept of 17.7 g/t Au in a 30-cm wide quartz-adularia vein at about 100 m below surface, (Watanabe, 1996). A deep geothermal exploration hole (1,833.8 m) drilled by New Energy and Industrial Technology Development Organization (NEDO) about 6 km north of the Minamikayabe lithocaps intersected mineralized volcanic rocks at the base of the hole that assayed 0.17 g/t Au, 3.12 g/t Ag, 0.33% Cu and 198 ppm Mo (no interval stated in literature), which is consistent with possible porphyry-style mineralization.

The Minamikayabe area is situated in the Kameda peninsula in southwest Hokkaido, the northern part of the Northeast Japan Arc, where epithermal base and precious metal deposits cluster in association with the Neogene igneous activity. In the Kameda peninsula, Mesozoic sedimentary rocks (Toi Formation) underlie Middle Miocene submarine andesitic volcanic rocks (Kunnui Formation) and Middle to Late Miocene submarine sedimentary rocks (Shiodomarigawa Formation) (Hata and Tsushima, 1971; Hata and Uemura, 1983). These Miocene rocks are intruded by NNW-SSE trending basaltic dikes of Middle Miocene age, and WNW-ESE trending dacitic intrusions of Late Miocene age (Hata and Tsushima, 1971; Hata and Uemura, 1983). Andesitic rocks of Pliocene and Quaternary age cover these older rocks, forming a NW-SE trending volcanic chain (Watanabe et al., 1996). Major Quaternary volcanoes in the chain include Komagatake, Yokotsudake, Maruyama and Esan from northwest to southwest. The Minamikayabe area is located near to the southeastern end of the volcanic chain (referenced from Watanabe et al 1996).

Japan Gold Exploration Work and Results: Japan Gold conducted a program of reconnaissance field work in August-September 2017, to validate the occurrence, conduct preliminary geological mapping and assess the prospectivity of the Minamikayabe AAA lithocaps for copper and gold. The work program included:

The two Minamikayabe lithocaps may have formed above telescoped porphyry systems. Mitsumoriyama, the western lithocap, is of particular interest and shows prominent alteration zoning and associated strong gold and multi-element anomalies, including an historic gold-mineralized drill intercept reported by the MMAJ. This higlights the potential for a disseminated gold-silver resource within the lithocap and an associated porphyry copper-gold deposit beneath this lithocap. Only the eastern edge of the Mitsumoriyama lithocap lies within Japan Gold’s application area. There is additional potential for high-grade gold veins between the two lithocaps within the project area. Based on the alteration and metal zonation patterns interpreted by Japan Gold’s consultants, the causal porphyry intrusions associated with the Minamikayabe lithocaps are interpreted to lie between 1 to 2 km depth below the present-day land surface.

The porphyry copper potential at Minamikayabe is supported by a 2014 report published by the USGS that assesses the porphyry potential of Japan. The project lies on a Late Miocene to Plio-Pleistocene segment of the Northeast Japan Arc hosted by calc-alkaline, andesitic-dacitic volcanic rocks. The USGS report documents that this arc segment, characterized by exposed advanced argillic alteration systems, is permissive for undiscovered porphyry copper deposits at depth. 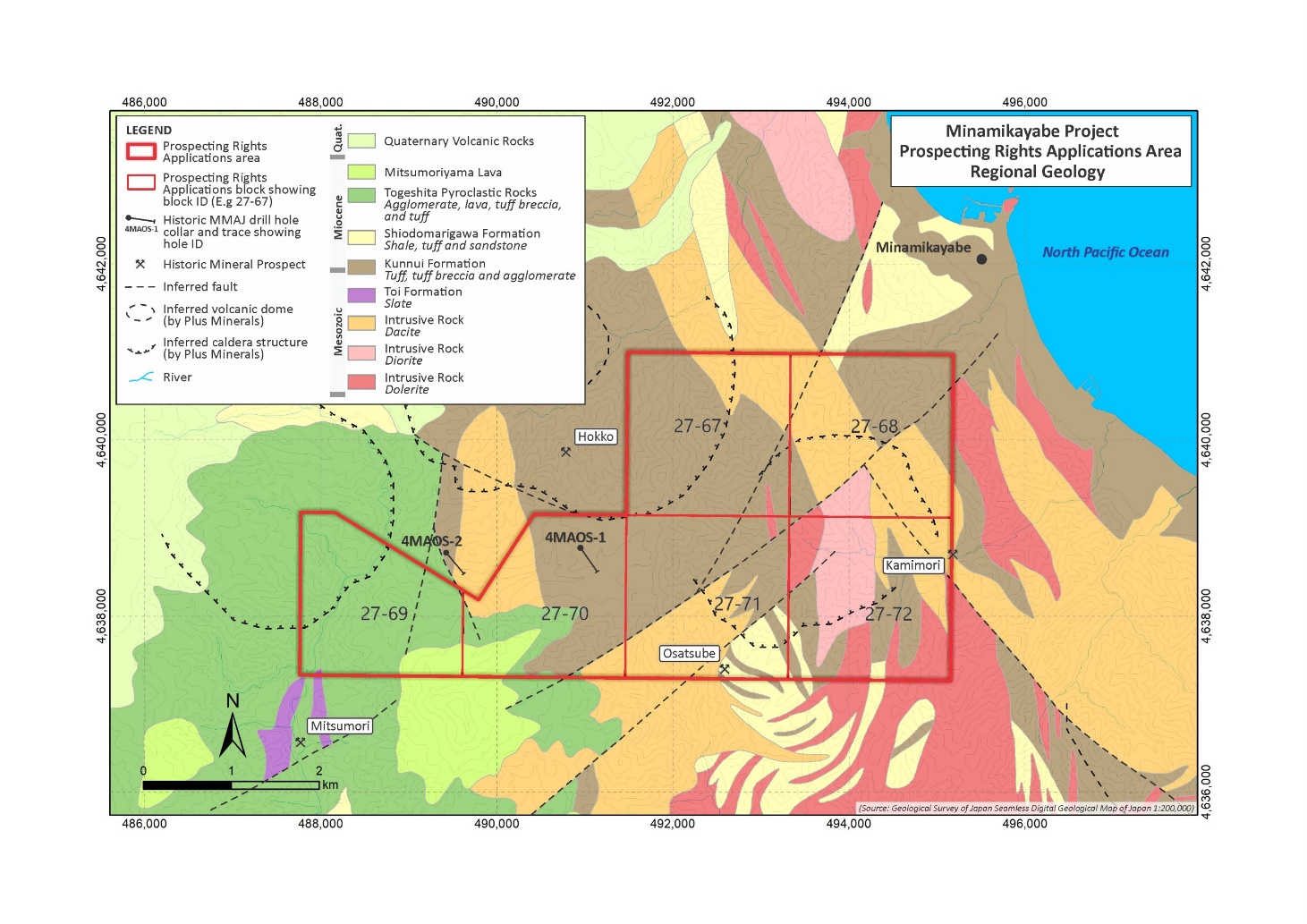 MITI (1992). Report on the regional geological structure in the Oshima-Shimokita area during the fiscal year Heizei 3, 434p. (in Japanese).

MITI (1997). Report on the regional geological structure in the Oshima-Shimokita area (reconnaissance survey for exploration of ore deposits) during the fiscal year Heizei 7, 66p. (in Japanese).