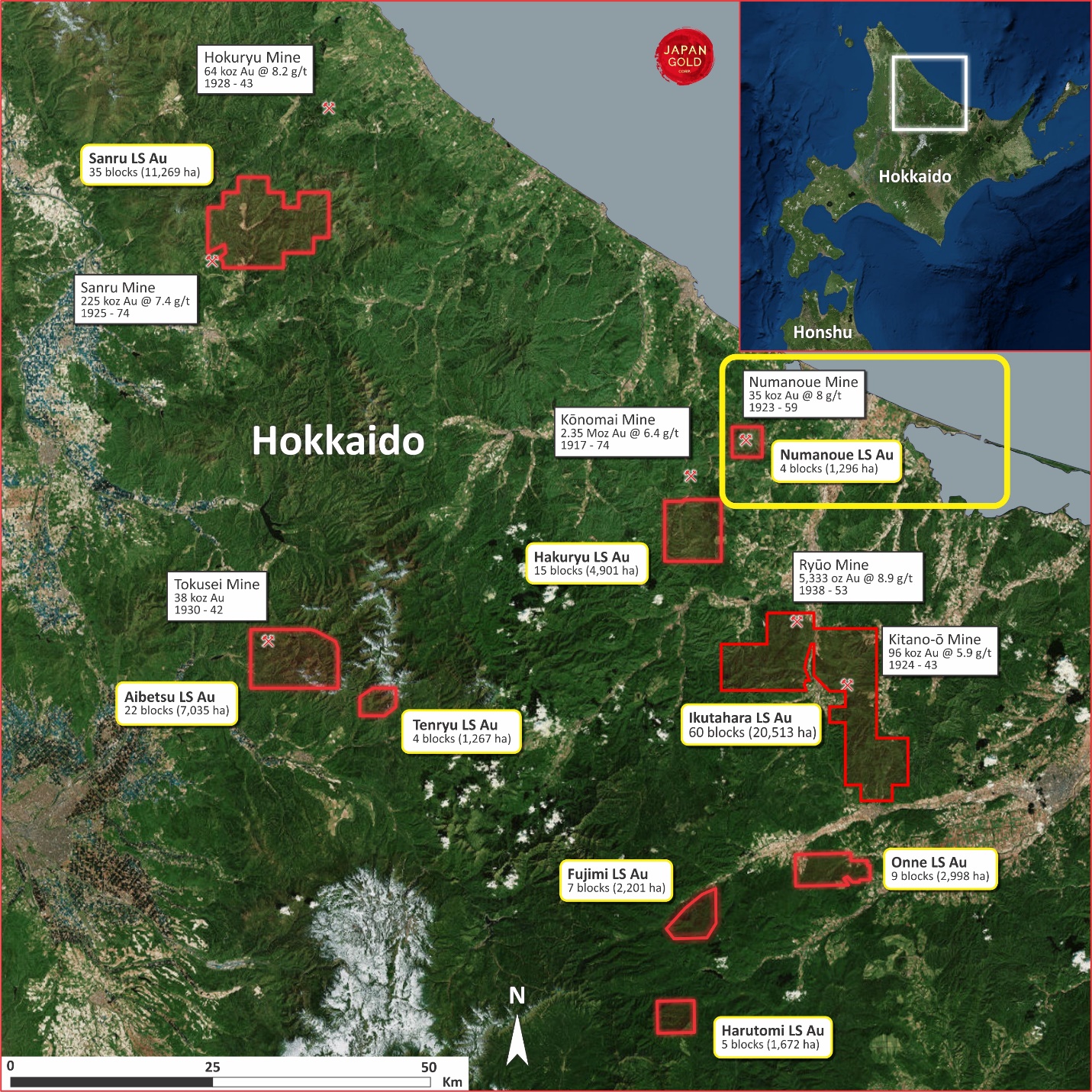 Numanoue comprises four contiguous blocks (1,296 hectares) that includes the historic Numanoue gold-silver mine, located in the Okhotsk district of northern Hokkaido. The project lies within the Kitami mining region along the N-S trending Monbetsu-Rubeshibe graben zone, approximately 8 km east of the region’s largest precious metal producer, the Konomai mine (2.35 Moz of gold and 40 Moz of silver1).

Recorded gold and silver production from the historic Numanoue mine (1923-59), located within the property, is 45,171 oz gold and 3.02 Moz silver2. Production was from a series of underground workings that total 22.5 km in length, mined to depths of < 150 m beneath surface (Table 1). The ore is described as fractured milky-white quartz that is surrounded by bladed quartz with varying degrees of silica replacement and recrystallization (‘bosa’ texture, indicative of boiling and quartz pseudomorphs after bladed calcite). Grades of 500 g/t Au and 3,000 g/t Ag are reported from local bonanza zones2 (raw analytical data upon which these results are based is not published, and thus, unavailable).

More recent exploration has been undertaken in the early 1990’s by the MMAJ as part of a regional metallogenic study which included an IP survey, soil and rock chip sampling and a single diamond drill-hole. In 1991, the MMAJ completed eleven lines of IP over the north-east portion of the project area. The lines ranged from 1.6 to 2.7 km in length and were spaced approximately 250m apart. Results of the IP survey revealed discrete resistivity and chargeability anomalies interpreted to represent zones of silicification and pyrite/clay alteration respectively. Most of the anomalies cluster within the northwestern part of the survey. The MMAJ considered that an overlap of high resistivity and chargeability represented the most likely location for mineralization and subsequently targeted such a zone with a diamond drill-hole that returned about 130 m of silicification and argillic alteration plus adularia from a depth of 170 m down-hole. Narrow quartz veins are reported between 170 and 195 m depth, including an intercept of 9.0 m at 0.3 g/t Au from 186 m downhole4 (information on the true width and frequency of this quartz veining is not published).

The gold mineralization in the Numanoue Project is classified as rift-related, low-sulfidation epithermal. Mineralization is typically associated with quartz-adularia-sericite±calcite in silicified and veined- or brecciated-structures, including dark sulfidic material, termed ginguro bands. The Numanoue mine, located near the center of the tenement, is hosted within a 5.0 x 1.0 km, northeasterly-elongate, hypabyssal rhyolite intrusion that cuts felsic tuff and rhyolitic lava sequences of Miocene age.

The Numanoue lode system strikes predominantly west-northwesterly to east-northeasterly and dips sub-vertically. Mineralized structures can be traced up to 400 m (Matsu Hi Vein). Average vein widths range from 0.2-4.5 m and past-production grades range from 2.7-17.0 g/t Au and 15-1,500 g/t Ag (Table 1)2. Veins display crustiform-colloform banding, comb and cockade quartz textures typical of epithermal systems.  Milky white quartz occurs in the lode centers and is surrounded by ‘bosa-type’, brittlely-fractured, fine-grained quartz (Photo 1). Bonanza zones are described as localized at the intersection of veins with faults and tend to be more prevalent where the host rhyolite is massive and lacks flow banding2. The presence of contrasting vein styles and textures suggests overprinting and multiple stages of hydrothermal vein fill and mineralization.

The Company has completed a compilation of published exploration data and historical mining data for the Numanoue Project. No field work has yet been undertaken on the project by Japan Gold. Historical exploration and mining data have been sourced from many entities including METI, MMAJ and Japanese universities, along with published technical papers by Japanese nationals and/or foreigners.

The Numanoue Project contains the historic workings of the Numanoue mine and is located seven kilometres northeast, along the major vein-trend, of the Konomai gold-silver deposit, which produced 2.35 Moz of gold at an average of 6.4 g/t Au1. The documented high gold and silver grades in both these deposits and textural evidence for multiple phases of vein development provide encouragement for exploration in the project area.

The work completed by the MMAJ has provided useful information about the geology along trend from the Numanoue mine and highlighted Au-As-Sb anomalies for follow-up. The sole drill-hole completed was designed to test the resistivity and chargeability anomalies associated with an epithermal vein system.  Although only low-grade gold was intersected, the wide zone of hydrothermal alteration may indicate the presence of a large scale hydrothermal system with stratigraphic contacts acting as conduits for ascending fluids. The electrical data and past geological mapping suggest that zone of gold-silver mineralization at Numanoue continues along strike to the northeast.

Little modern exploration has been undertaken on the tenement or in the region. The Company considers that down-dip and along-strike extensions to the multiple high-grade vein lodes occurring in the historic Numanoue mine, which were only mined to a maximum 150-m vertical depth, are valid exploration targets for additional high-grade gold-silver resources. The area immediately surrounding the historic Numanoue mine is the highest priority exploration focus although additional targets could be identified with systematic reconnaissance work.

2 METI (formerly known as MITI), 1990. The Report of Geological Structure Survey of Mineral Deposits of B Area in Northern Hokkaido”. The Agency of Natural Resources and Energy of MITI, March 1990.