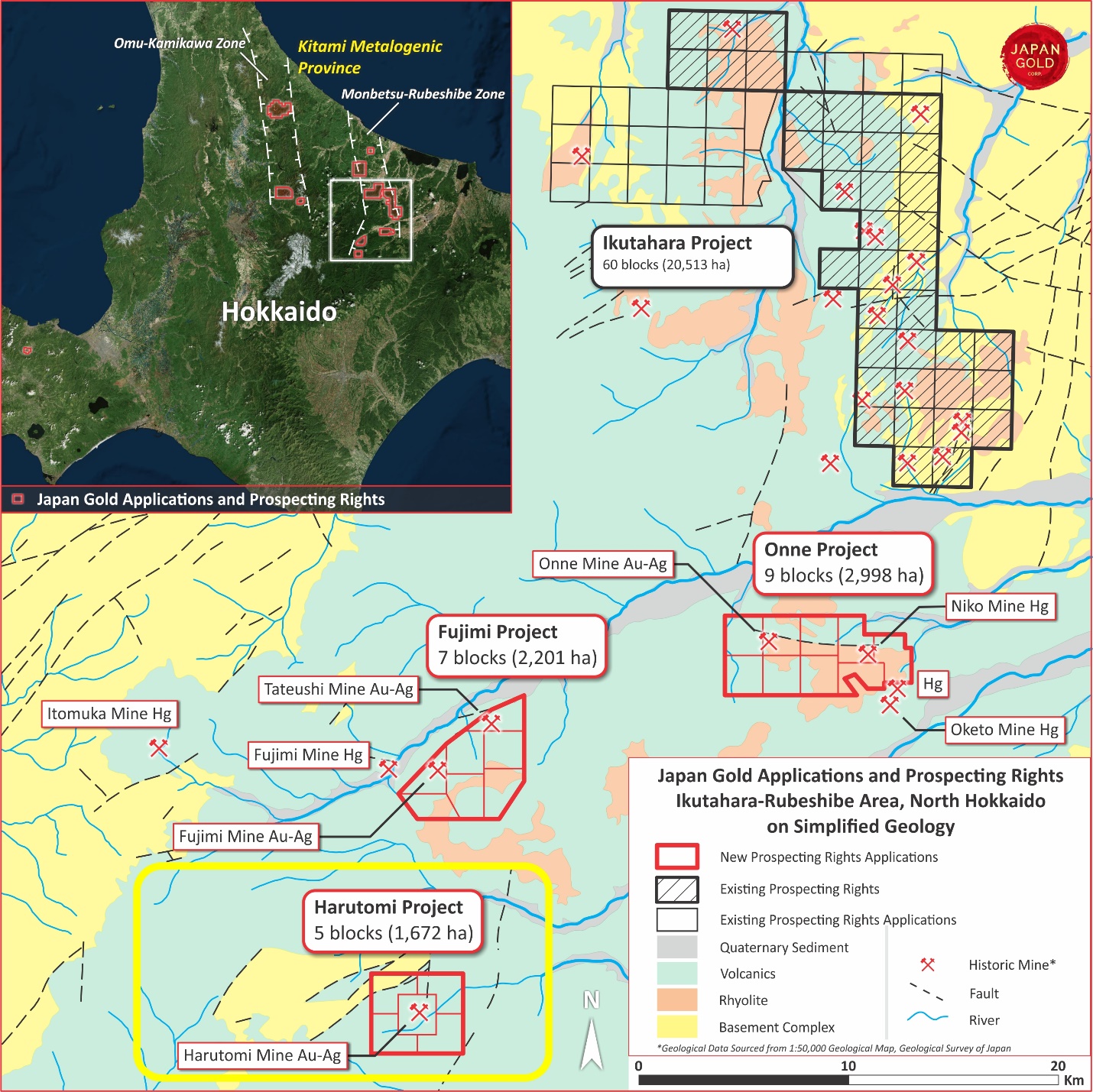 The project lies within the Kitami mining region along the southern portion of the N-S trending Monbetsu-Rubeshibe graben zone, which hosts numerous epithermal mineral occurrences, historical mines and workings dating from the early 1900’s. This portion of the graben contains several small gold, silver and mercury mines. Gold-bearing quartz vein boulders were discovered in the Harutomi area during 1939. In 1945, Sumitomo Metal Mining Company acquired the property and conducted detailed surface mapping and sampling, geophysical surveys, and underground exploration and development work in the Harutomi vein-lodes. The Harutomi mine1 produced 2.5 Koz of gold and 98 Koz of silver at average grades of 4.7 g/t Au and 186 g/t Ag from underground lodes during 1960-70. A total of 7,810 meters of underground development was completed over several veins, known as the No. 2, 3, 5 and 7 Veins in the northwest, and Shikami No. 1, 2, 3 and 5, in the southeast1.

A resistivity survey conducted by Sumitomo over the Shikami No. 2, 3, and 5 vein areas identified anomalous resistivity targets. There has been no follow up of these anomalies to date. Historical sampling of quartz vein boulders in the western part of the No. 3 vein yielded assays up to 8.3 g/t Au and 1,458 g/t Ag, which are coincident with one of the resistivity anomalies (note raw analytical data upon which published gold-silver values are based are not published) 1

Historic exploration activities during 1960-70 were limited to the area of known veins. There are no records of systematic exploration drilling to test for vertical and lateral extensions of veins partially mined or developed underground, or other sub-parallel veins that were identified on surface.

The gold mineralization styles at the Harutomi Project are similar to those described within the near-by Fujimi and Onne Project areas, and are classified as rift-related, low-sulfidation epithermal. Mineralization is typically associated with quartz-chalcedony-adularia-sericite±calcite in silicified and veined- or brecciated-structures. The Harutomi veins comprise banded chalcedonic to microcrystalline quartz, which contain fine-grained sulfide mineral bands (‘ginguro’), pyrite, sphalerite, chalcopyrite, cinnabar, manganese oxide and free gold. Gangue minerals are quartz, calcite, kaolinite, chlorite, adularia and montmorillonite. Grey chalcedonic quartz with Ag-rich ginguro bands are common in the Shikami vein lodes that strike N80°E to N60°W and dip steeply towards the north and south. In contrast, calcite is dominant in the western lodes, which commonly strike northeasterly and dip steeply towards the northwest. Host rocks consist of Miocene andesitic tuff and a quartz diorite stock that are strongly silicified adjacent to the veins and chlorite-clay altered in more distal settings.

Historical mapping indicates there are at least ten known gold bearing quartz veins1 and/or mineralized outcrops over a 900 m (north-south) by 600 m (east-west) zone with identified strike lengths that range from 90 to 500 m and vertical extents that range from 60 to 140 m (Table 1). The Shikami vein No. 5, one of the largest lodes, has a recorded average thickness of 2.1 m, with segments that reach up to 10 m wide. Ore-shoot lengths in the Shikami vein system range from 4 to 57m long, with average assay values reaching up to 15.8 g/t Au over a width of 0.95 m (note raw analytical data upon which published gold-silver values are based are not published) 1.

Table 1.  Summary of the Harutomi veins. 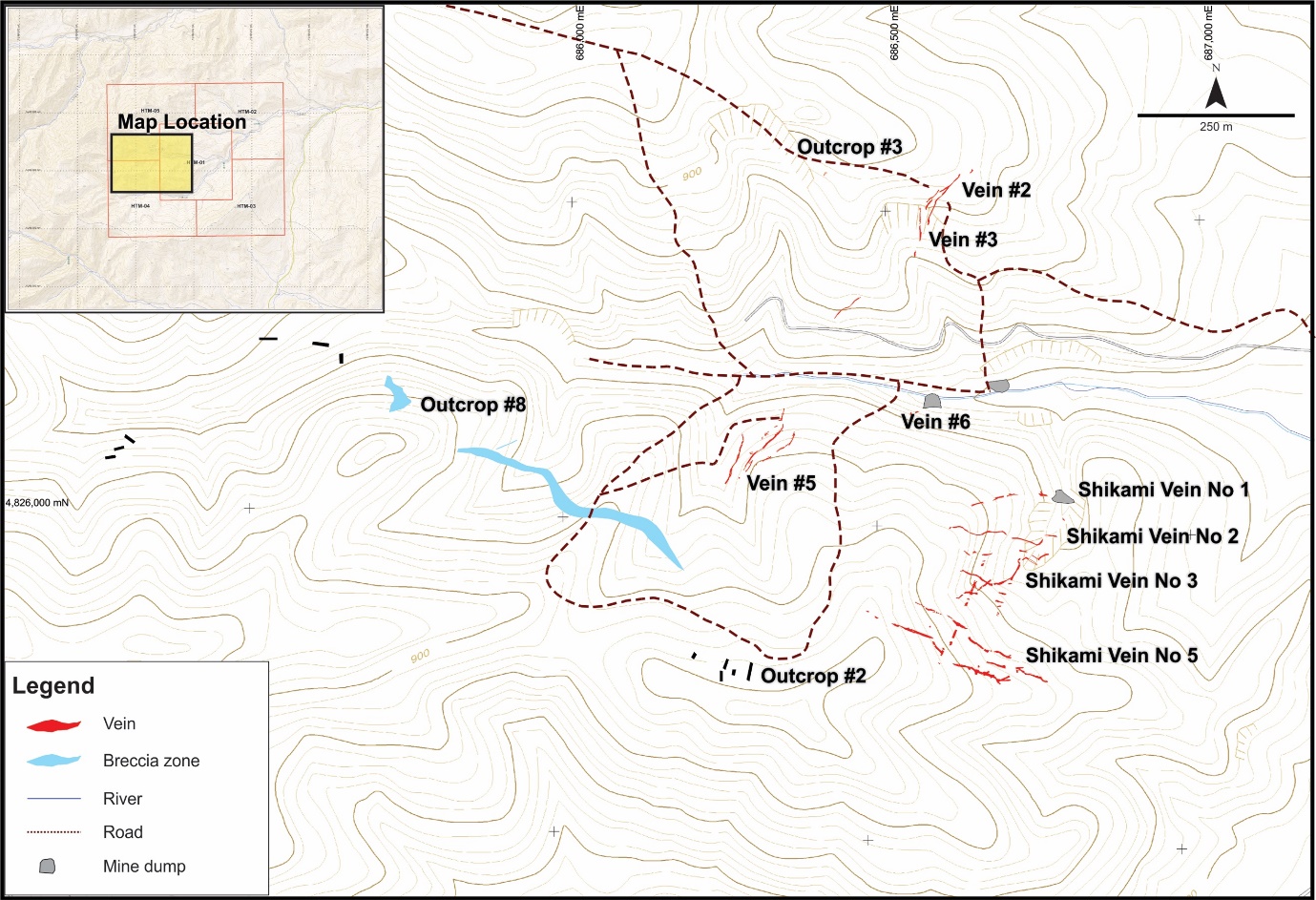 Quartz vein swarms within the central western portions of the Harutomi Project area.

The Company has completed a compilation of published exploration data and historical mining data for the Harutomi Project. No field work has yet been undertaken on the project by Japan Gold.

Previous studies in the Harutomi – Fujimi – Onne region indicate that gold and mercury mineralization are genetically-related. In many epithermal systems, mercury typically occurs at the highest paleo-levels, above banded and bladed epithermal quartz veins, and acts as a pathfinder element in precious metal exploration.  The quartz veins in the Harutomi area are banded and epithermal in character. This relationship, and proximity to the Fujimi, Niko and Oketo mercury mines to the north, suggest that post-mineral erosion of the system is limited and that the highest levels of the epithermal field(s) are probably preserved. The historic underground development on veins in the licenses have yet to adequately test the potential for bonanza-grade gold-silver veins at depth.

A genetic relationship between mercury and epithermal gold mineralization exists in the Sulphur Creek-Knoxville mercury mining districts of California, where Homestake Mining discovered the McLaughlin epithermal gold deposit by drilling beneath a cinnabar- bearing sinter in the late 1970’s2.  The McLaughlin deposit produced about 3.5 million ounces of gold3.

Japan Gold proposes to explore the potential link between mercury and epithermal gold mineralization. Exploration to date is limited to the area of known veins and no exploration drilling has been completed to test the deeper extensions to the veins historically mined to a shallow level. Japan Gold will seek to define the limits of the hydrothermal alteration cells around the historic Harutomi mine and use surface mapping and geochemistry to target new zones and extensions to previously exploited vein systems for testing by scout drilling.