February 28, 2018 – Vancouver, BC – Japan Gold Corp. (TSX-V: JG) (“Japan Gold” or the “Company”) is pleased to report results from its 2017 exploration program at the Aibetsu Epithermal Gold-Silver Project. Results confirm the presence of high-grade gold mineralization within and around the historic Tokusei mine workings and emphasize significant potential for extensions to the epithermal vein system at the Tokusei mine.

Chairman and CEO, John Proust, stated, “The potential for high-grade gold vein mineralization at deeper levels below and surrounding the historic Tokusei mine workings is largely untested at Aibetsu. The occurrence of sedimentary basement rocks at shallow levels beneath the gold workings also presents a target for high-grade mineralization proximal to the basement unconformity, similar in style to the Hishikari deposit in Kyushu.”

The 2017 exploration program at the Aibetsu Project included rock chip sampling, detailed mapping and a soil grid geochemical survey over three historic gold-silver and mercury mines within its 7,035 hectare project. The project location is shown in Figure 1.

Assay results were received for 237 selective grab and chip samples collected from mine dumps, workings and creek float in the Tokusei mine area. Sample locations and significant gold results (>0.5 g/t Au) are presented in Figure 2 and Table 1. Forty-one of these samples from the Tokusei gold workings gave gold and silver results ranging from 1.24 to 78.4 g/t Au and 2.87 to 255 g/t Ag, respectively (refer to Table 1). The samples are also anomalous in the epithermal pathfinder elements arsenic, antimony and mercury.

Most of the higher-grade gold and silver results (>10 g/t Au and >50 g/t silver) are from vein outcrops, float and dump material found on and adjacent to the historic underground mine workings, where the upper parts of the Tokusei vein system are exposed.

Maruyama Ridge, located above the Tokusei mine workings, is capped by cherty silicified laminated mudstone interbedded with volcanic (rhyolitic-) sandstone, silica sinter and possible eruption breccias, representing an epithermal paleosurface and subsequently preserved nature of the vein system. These rocks are strongly anomalous in epithermal pathfinder metals including arsenic, antimony and mercury. Selective sampling of these rocks returned up to 205 ppm As, 275 ppm Sb and 12.4 ppm Hg, respectively. A high gold result of 11.15 g/t Au was returned in one grab sample of interlayered mudstone and sinter float cut by a narrow-bladed quartz vein, which probably represents the very upper parts of Tokusei epithermal system.

Four samples from the Motoyama mercury workings, located about 3km south of Tokusei, returned gold and silver results ranging from 1.04 to 7.05 g/t Au and 13.9 to 91.7 g/t Ag, respectively (See Table 2). The samples were also anomalous arsenic, antimony and mercury with maximum results of 740 ppm As, 184 ppm Sb and 1065 ppm Hg, respectively. Base metal results are very low.

The rock chip results reported in this announcement support the gold and silver grades in historic mine records and emphasize the presence of high-grade mineralization in the Tokusei mine area.

Geochemical soil sampling was completed over a large portion of the western side of the project area. Six hundred and sixty soil samples were collected at 50 m sample intervals along eight 500 m spaced north-south oriented gridlines. The grid lines were located to infill a previous soil survey completed by Nittetsu Mining Co. Ltd. (“Nittetsu”) in 2000 and reported in the Metal Mining Agency of Japan (“MMAJ”) database. These two surveys provide a soil sampling density of 250 m by 50 m over the Tokusei mine area and broader 500 m spaced coverage further south over other historic workings. Results over the Tokusei mine area highlight a large-coincident 2 by 1.5 km northeast-southwest elongate area of anomalous gold (>26 ppb), arsenic (>42.6 ppm), antimony (>5.97 ppm) and mercury (>1.58 ppm) in soils adjacent to and along strike of the Tokusei vein system, refer to Figures 3, 4, 5, 6 and 7.

As expected anomalism is high over the Tokusei vein system where it is exposed at surface, however, coincident gold, silver and pathfinder element anomalism (Hg, As, and Sb) are continuous along strike of the vein system to the northeast and southwest and may be indicative of blind mineralization not exposed at surface.  Drilling reported by the MMAJ 500 m along strike to the northeast of the Tokusei vein system reported significant intercepts of 0.95 m @ 69 g/t Au, 263 g/t Ag (13MAHB-1) and 0.16 m @ 11.8 g/t gold and 7 g/t Ag (13MAHB-2) 4, a wider gold intercept of 7.5 m @ 1.92 g/t Au and 11 g/t Ag (14MAHB-1) was recorded from drill hole 14MAHB-15. As part of this drill campaign drill hole 12MAHB-1 was sited to the southeast of the Tokusei mine workings to test below the vein system. The hole drilled at an inclination of -60 degrees to a depth of 702 m, 4 weakly gold and silver anomalous quartz veins between 0.7 to 0.9 m in length downhole were intersected between depths of 250 and 500m below surface and the Mesozoic basements sediments were met at around 520 m below the workings. These drill results show that mineralizing structures are persistent to depth and along strike and require further exploration drill testing.

Rock results presented herewith are from 1-2 kg selected grab and chip samples taken from creek float and outcrops, historic mine exposures and dumps. Where in-situ quartz veins were exposed these were chip channel sampled. The grab samples of float and dump material reported in this announcement are believed to originate from the underlying bedrock and are therefore representative of the mineralization hosted on the property. Sample preparation and assaying were done by ALS Chemex, Guangzhou, China. Gold was analyzed by 50-charge Fire Assay and AAS finish. 48 multielement analysis including silver were done by four-acid digest and ICP-AES/MS determination.

Soil results presented herewith are from 0.5-1 kg of unsieved clay/saprolite samples collected from soil C-horizon’s at the bedrock interface. The samples were taken using a crow-bar and shovel by first removing the organic-rich top soil and then digging down about 20-30 cm to collect the clay/saprolite sample. Duplicate samples were taken at every 25th sample site. Sample preparation and assaying were done by ALS Chemex, Perth, Australia. Gold was analyzed by 25g-charge aqua regia digest and ICP-MS finish. 48 multielement analysis including silver were done by aqua regia digest and ICP-AES/MS determination.

The laboratory inserts its own blank, standards & sub-split pulp duplicates for Quality Control and reports these results accordingly. Results fall within acceptable levels of accuracy and precision.

The Aibetsu Project comprises 22 prospecting rights application blocks covering an area of 7,035 hectares. This project lies within the N-S oriented Omu-Kamikawa Zone of the Kitami Metallogenic Region in northern Hokkaido and is underlain Late Miocene andesitic to rhyolitic volcano-sedimentary rocks and metasedimentary basement rocks, intruded by rhyolites that are interpreted to have a spatial and temporal association with epithermal gold-silver and mercury mineralization in the region.

Historic mine workings are located within the applications area and these were developed on low-sulfidation type epithermal quartz veins associated with hot-spring related paleosurface features such as silica sinters, fine-grained sediment silicification and eruption hydrothermal breccias.

Vein outcrops at Tokusei were discovered by a local prospector, Mr. Tokuzou Abe, in 1930. The main mining activity was done by Nippon Mining Company between 1932 and 19431. Gold mining in Japan was suspended 1943 under a government regulation aimed at focusing resources to more strategic commodities during World War II. Many of the historic workings that were active in the area stopped in ore and never reopened. The project area has seen only minor exploration since that time.

The historic Aibetsu gold field consists of at least three (3) known hard rock and eluvial gold and mercury workings; Tokusei (Au), Motoyama (Hg) and Yamamezawa (Hg). The largest of these was the Tokusei gold mine, which is reported to have produced about 38,000 ounces gold and 474,000 ounces silver from underground development between 1930 and 19432.

Historic production at Tokusei was from an array of at least 20 parallel/subparallel ENE-WSW to NE-SW trending veins hosted in andesitic volcanic rocks. The veins were reported to be banded chalcedony-adularia-carbonate-chlorite veins containing electrum, silver sulfides and pyrite. The historic workings consist of numerous shallow diggings, pits, and collapsed tunnels on the eastern side and northern slope of Maruyama Ridge. The veins were apparently mined down to a vertical depth of at least 200 m beneath Maruyama Ridge, however, historic production records and maps of the underground workings are scant. The individual productive veins varied in length from about 22 to 425 m, and in average thickness from about 0.17 to 0.8 m, with near-vertical dips. Averaged gold and silver grades from individual veins were variable from <1 to 16.2 g/t Au and 9 to 198 g/t Ag, respectively. One exceptional vein, the Sanjinhi vein, averaged 6.4 m in width over a 140 m strike-length and averaged 17.7 g/t Au and 20.4 g/t Ag3.

Nittetsu, formerly part of the mining division of Nippon Steel Corporation, held the Tokusei and Aibetsu mine areas as part of eight mining concessions totalling 26 km² during 1998-2002.

MMAJ undertook regional surveys of the Aibetsu area as part of a larger metallogenic study of northern Hokkaido in the 1990’s. These included a ground-based gravity survey and airborne electromagnetics survey. Regional stream sediment sampling, geological mapping and surface rock sampling were carried out by MMAJ and Nittetsu in 1999, highlighting coincident gold-arsenic-mercury anomalies within and surrounding the historic mine areas. Prospect evaluation work was done over the Tokusei mine prospect area from 2000 to 2002 by MMAJ and Nittetsu. This included a grid soil survey, surface rock sampling, alteration mapping, petrological studies and an IP-resistivity survey. Coincident geochemical anomalies and resistivity highs associated with alteration features mapped over the Tokusei gold and Motoyama mercury workings were returned from this work.

Five inclined scout diamond holes were drilled during 2000-2002 testing coincident geological, geophysical and geochemical targets. Narrow high-grade gold and silver intercepts were returned in two drill holes targeted beneath a mercury soil anomaly located about 500 m northeast of the Tokusei mine workings; 0.95 m @ 69 g/t Au & 263 g/t Ag from 468 m down-hole in 13MAHB-1, and 0.16 m @ 11.8 g/t gold and 7 g/t Ag from 525 m down-hole in 13MAHB-2, at about 300 m and 450 m below surface respectively. The other three holes returned narrow low-grade intercepts or no significant gold intercepts.

The scientific and technical disclosure in this news release has been reviewed and approved by Japan Gold’s President & Chief Operating Officer, Dr. Mike Andrews, PhD, FAusIMM, who is a Qualified Person as defined by National Instrument 43-101.

Japan Gold Corp. is a Canadian mineral exploration company focused solely on gold and copper-gold exploration in Japan. The Company holds 32 prospecting rights and 178 prospecting rights applications in Japan for a combined area of 69,505 hectares (695 square-km) over 17 separate projects. These prospecting rights and applications cover areas with known gold occurrences and a history of mining, and are prospective for both high-grade epithermal gold mineralization and gold-bearing lithocaps, which could indicate the presence of porphyry mineralization. Japan Gold’s leadership team has decades of resource industry and business experience, and the Company has recruited geologists and technical advisors with experience exploring and operating in Japan. More information is available at www.japangold.com or by email at This email address is being protected from spambots. You need JavaScript enabled to view it.. 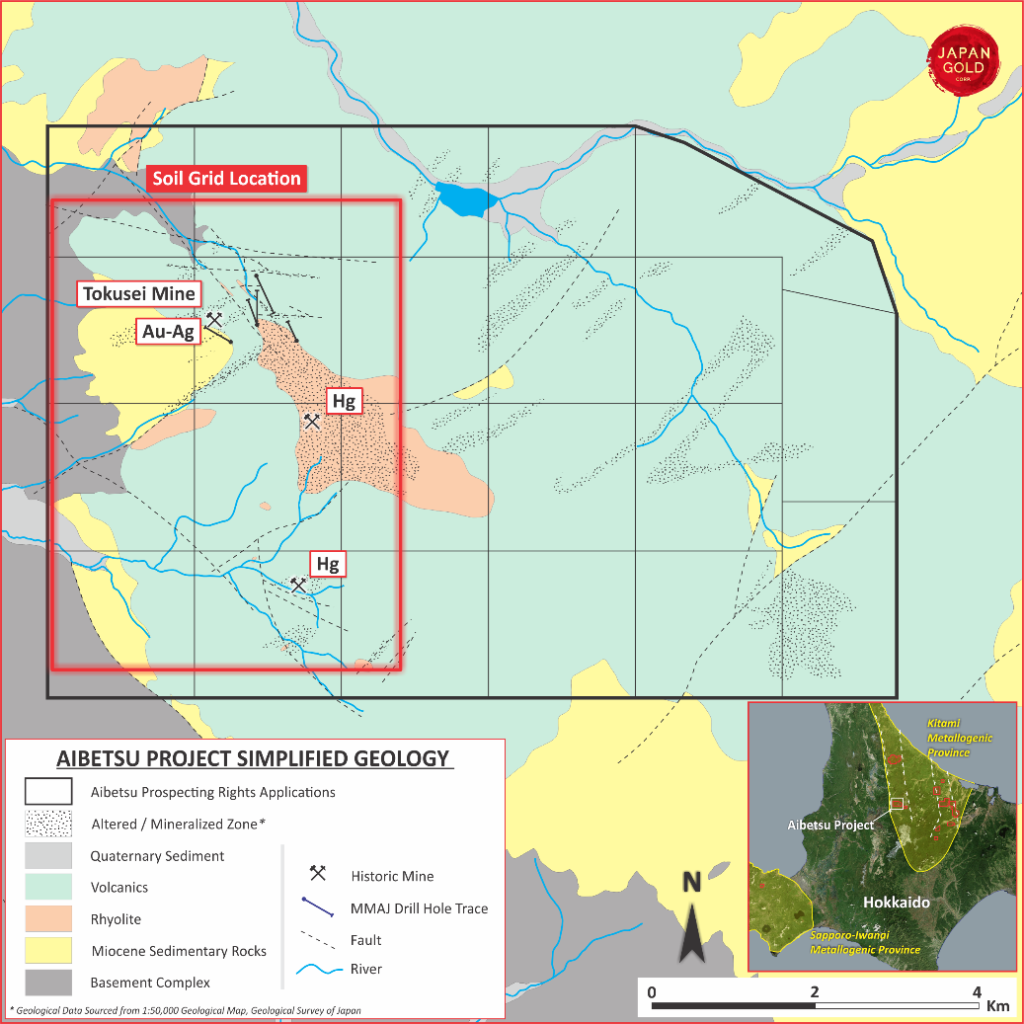 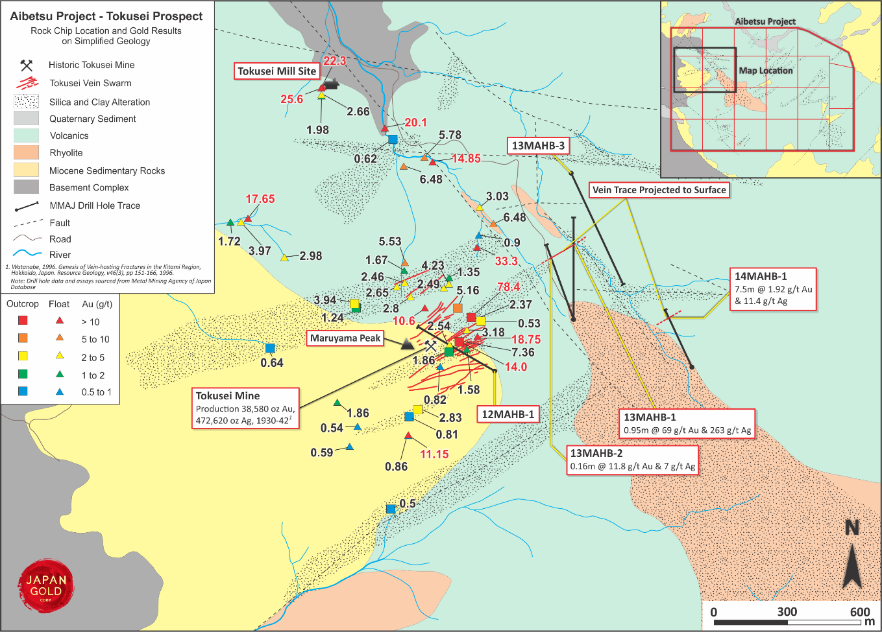 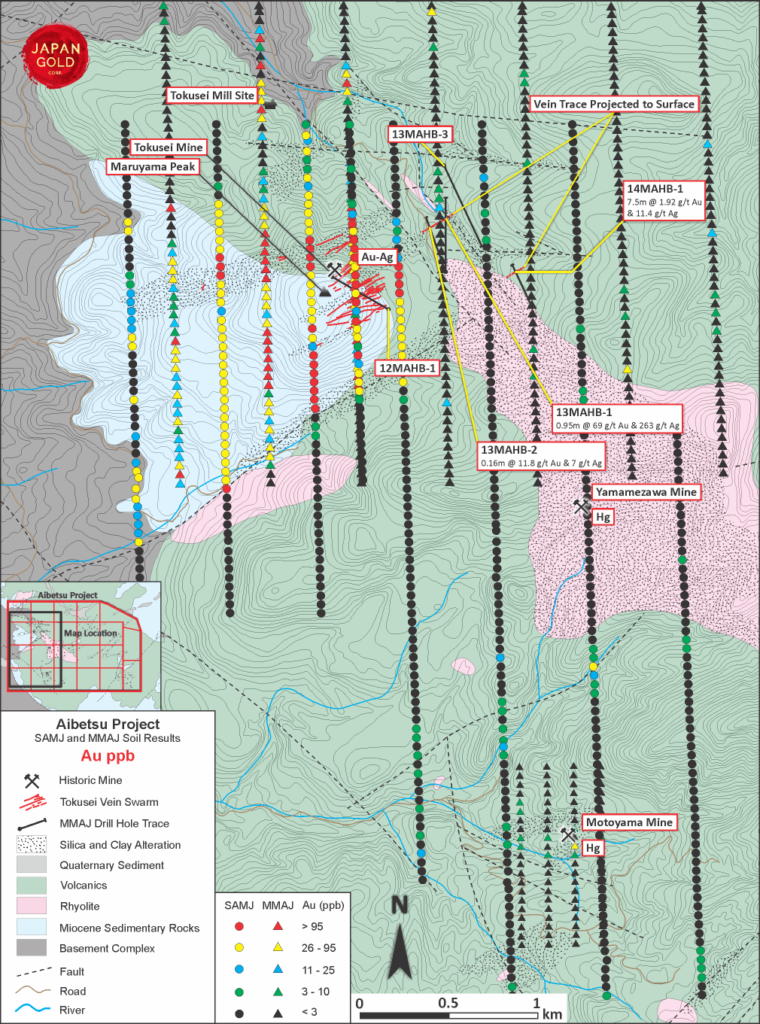 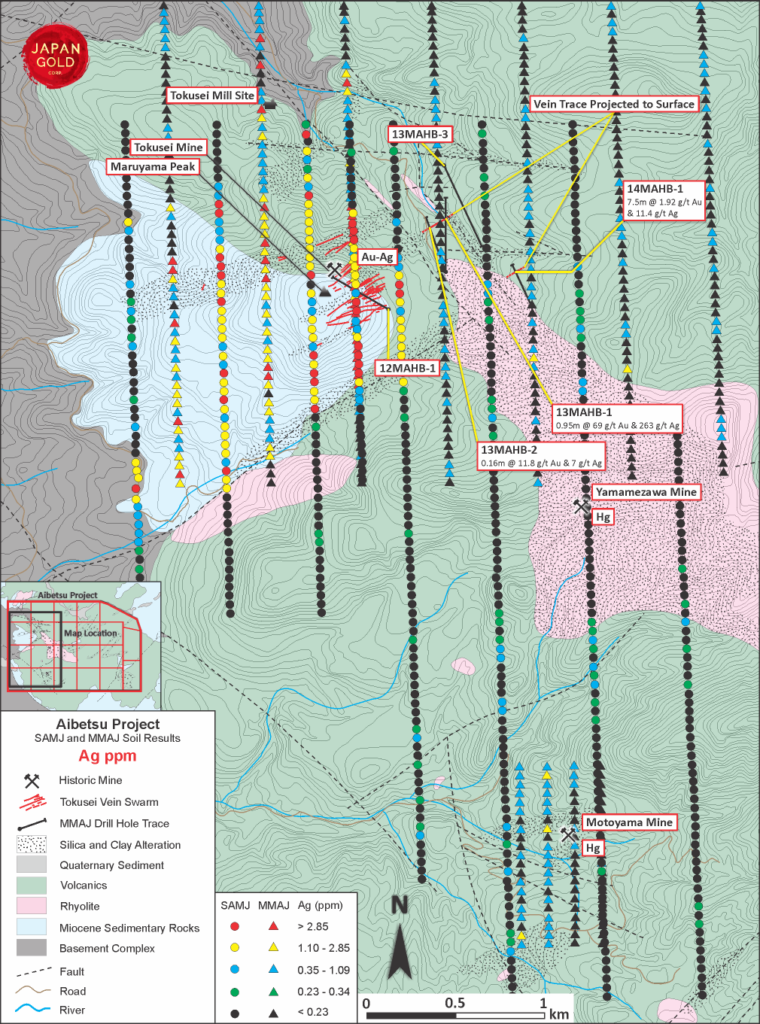 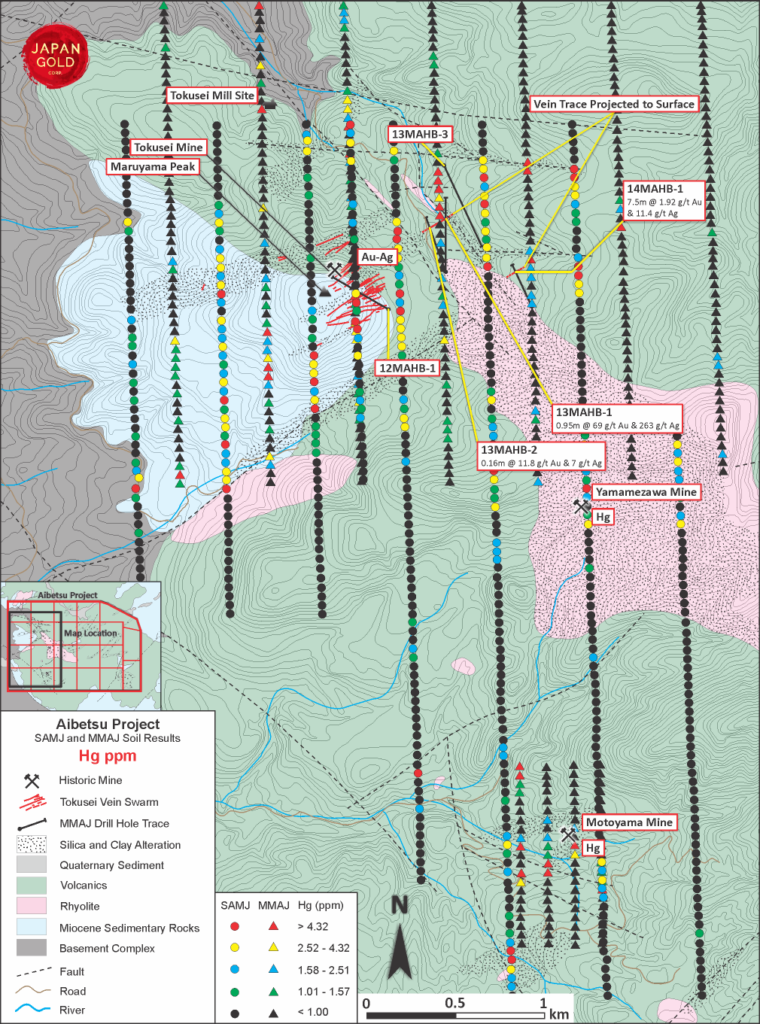 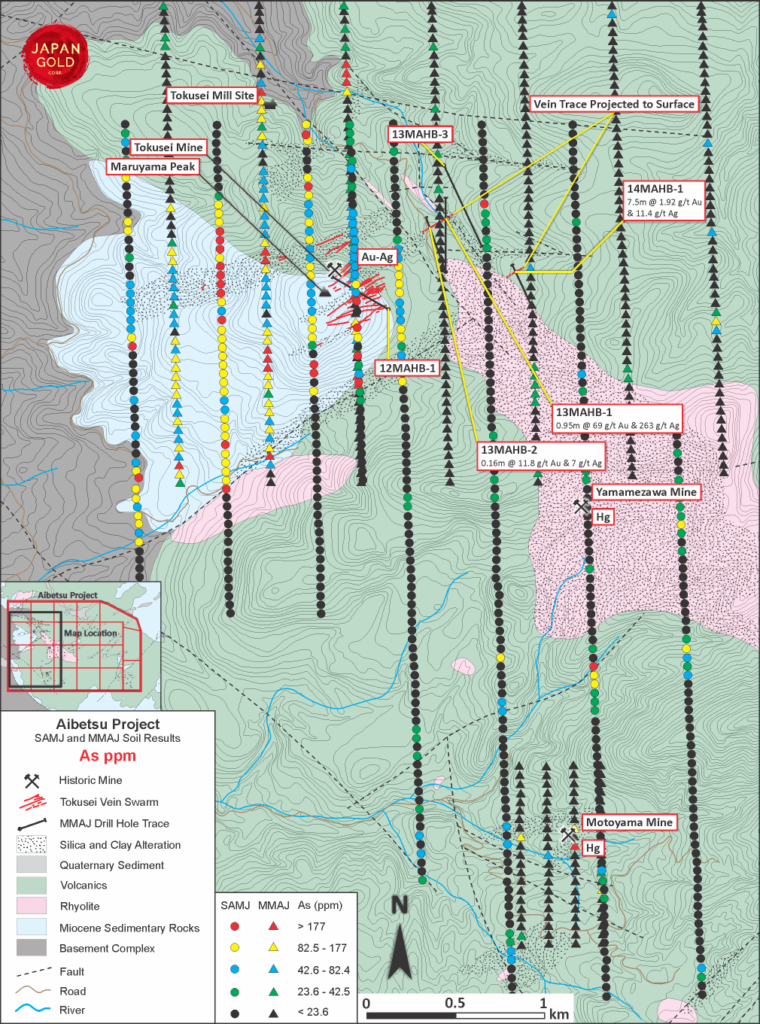 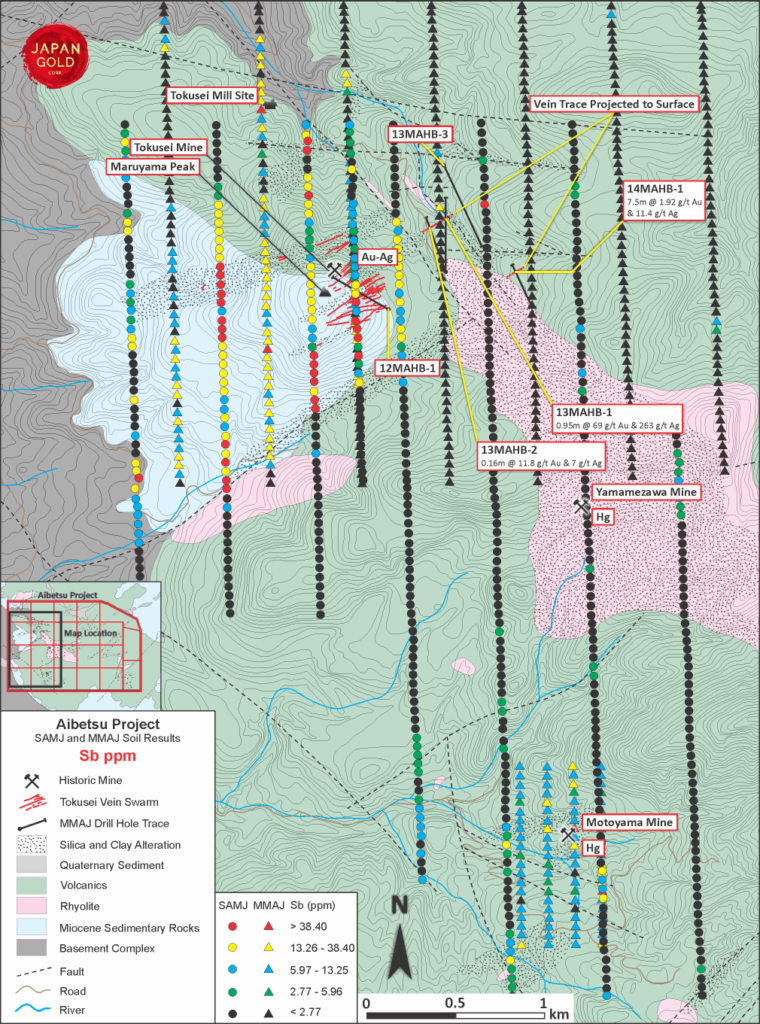 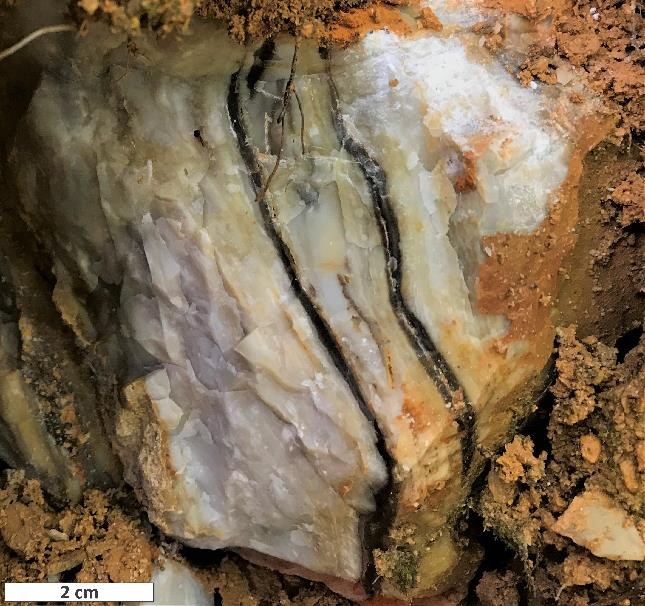 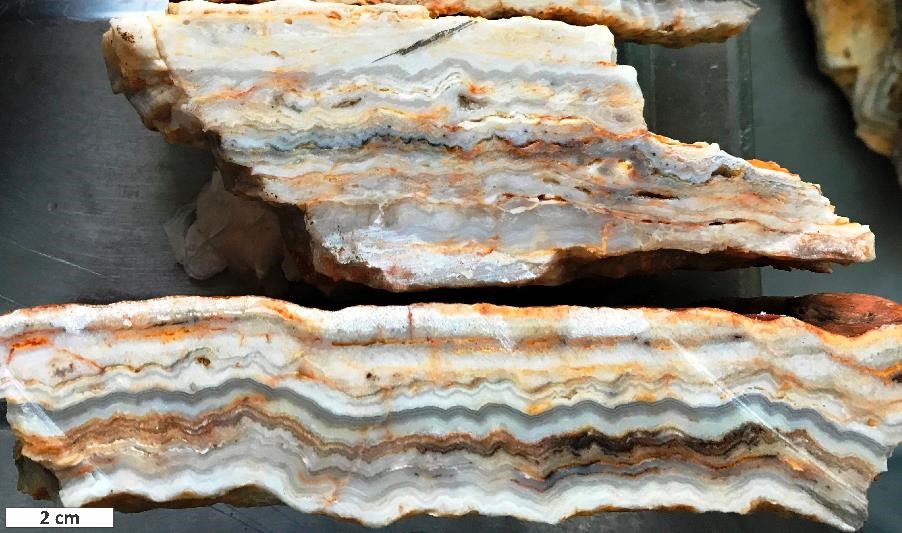