February 9, 2017– Vancouver, BC – Japan Gold Corp. (TSX-V: JG) (“Japan Gold” or the “Company”) is pleased to report that it has completed first-pass regional exploration of its 13,286 hectare Ikutahara Project (“Ikutahara”) in north Hokkaido, Japan. Ikutahara hosts fifteen historical gold mines and workings (Figure 1). Six geologists and support teams undertook a nine-week field program from October to December 2016, completing prospecting, geological mapping, collecting stream sediment and BLEG drainage samples and rock float and outcrop sampling over the majority of the Ikutahara area. The regional results are being compiled and interpreted and will be reported in a further news release.

The Company also completed historical data compilation (Note 1) and detailed mapping of two advanced Ikutahara prospects, which are the areas surrounding the historic Ryuo gold-silver mine and Akebono gold-silver workings.

Results of the Historical Compilation and Detailed Mapping

The Ryuo mine operated before the Second World War and workings were developed on up to six levels on two veins, the Jinja and Shouei veins. A number of peripheral veins were also mined nearby. The location of the Ryuo mine is shown in Figure 1 and the geology of the area surrounding and other identified veins is shown in Figure 2. Workings on the main Jinja vein were developed to approximately 75 m below the surface before the government imposed mine closure in 1943.

The Metal Mining Agency of Japan (MMAJ), a Japanese Government Agency has published underground mapping and sampling results completed at the Ryuo mine during the 1950’s (MMAJ, 1990)1. Japan Gold has compiled this data.

High-grade gold/silver quartz veins were mapped on all four of the lower levels of the Jinja vein system. Chip-channel samples had been collected at intervals spaced between 0.3 m and 4.7 m along strike of the veins exposed in the roof (the “backs”) of the levels and assayed for gold and silver. The published MMAJ data indicates significant high-grade shoots on levels 4, 5 and 6 (Figure 3). These channel samples confirm the potential for discovery of high grade epithermal gold/silver mineralization at the Ryuo mine.

Highlight results of compilation of SMMC’s sampling include:

The Company has calculated average grades of gold and silver along horizontal strike extent of the shoots by width-weighted averaging sample intervals of all channel samples across the vein.

The location of the Akebono workings is shown in Figure 1. Historical underground exploration development commenced on the Akebono vein in the late 1930’s but was also terminated by 1943 with the government imposed cessation of gold mining activities throughout Japan. The known workings consist of two 120 m long drives and several winzes sunk to a vertical depth of approximately 100 m. These were developed on a moderate to steeply dipping, 0.5 to 4 m wide epithermal gold-silver bearing quartz vein, Figure 4.

The main Akebono vein trends ENE-WSW and Japan Gold’s recent prospect mapping has shown that along its strike, banded and bladed textured quartz-chalcedony veins up to 4 m wide crop out over a 600m long NE-SW trend that is open in both directions along trend.

First pass rock samples collected by the Company have returned encouraging gold and silver results up to 20.7 g/t Au and 290 g/t Ag from vein float. Detailed mapping will re-commence when the snow clears in April with the objective of delineating the extent of mineralization.

The MMAJ report (MMAJ, 1990)1 indicates that the Akebono workings were re-opened during the 1960’s and systematic sampling was completed within the two exploration drives. The MMAJ data has been compiled and plotted by Japan Gold. These results are shown in Figure 4. High-grade gold-silver mineralization is noted on both levels sampled and in a vertical shaft beneath Level 2 and gives best intervals of:

The spectacular high gold and silver grades reported and vein widths mapped up to 4 m in width in the field show that the area around the Akebono workings, which has had no modern day exploration, has great potential for further high grade discoveries. Detailed exploration and testing drill targets at Akebono is one of Japan Gold’s priorities for 2017.

John Proust, Japan Gold Chairman & CEO commented “Ryuo and Akebono are two of the fifteen historic mines and workings reported within the project area that were mostly mined between the early 1920’s to the government imposed closure of gold mines in 1943. The scale and gold-silver grade of these epithermal prospects supported by the historical data from underground workings is very encouraging at this early stage of our work and mineralization appears to be open at depth and along strike. Going forward we plan further detailed prospect mapping over priority targets throughout the 2017 field season. We look forward to drill testing both Ryuo and Akebono in 2017.”

Multiple gold-silver and mercury prospects including fifteen documented mines and workings are located within the project area and the majority comprise epithermal veins, with other hot spring related features such as hydrothermal breccias and silica sinters.

The prospects were discovered and intermittently mined between 1910 and 1943. Gold mining in Japan was suspended 1943 under a government regulation aimed at focusing resources to more strategic commodities during World War II. Many of the historic workings that were active in the area stopped in ore and never reopened. The project area has seen only minor exploration since that time.

The most significant historic gold production in Japan Gold’s Ikutahara project came from the Kitano-o mine (1924-43), reported to have produced 96,4502 ounces of gold from mining of gold-bearing eluvium associated with sinter deposits and sub-sinter epithermal veins within rhyolitic volcanic rocks. Within the central part of the project area the Kitano-o, Showa and Ikutahara mines represent a unique style of ‘high-level’ gold mineralization. Sinter deposits generally represent the surface expression or outflow of epithermal vein systems developing at depth. The Company will be exploring for such vein zones that may lay at depth beneath these high-level deposits; and depth and strike extensions of the numerous other vein targets.

The Company’s compilation has been based on data published by the MMAJ and the Company has not resampled the underground workings or re-assayed samples. The MMAJ report does not refer to QA/QC protocols followed historically.

Japan Gold Corp. is a Canadian mineral exploration company focused solely on gold and copper-gold exploration in Japan. The Company has applied for 115 prospecting rights licenses in northern Japan for a combined area of 38,375 hectares over nine separate projects. The applications cover areas with known gold occurrences and a history of mining, and are prospective for both high-grade epithermal gold mineralization and gold-bearing lithocaps, which could indicate the presence of porphyry mineralization. Japan Gold’s leadership team has decades of resource industry and business experience, and the Company has recruited geologists and technical advisors with experience exploring and operating in Japan. Low-impact surface exploration is underway, with the expectation of applying for drilling permits in early 2017. More information is available at www.japangold.com or by email at This email address is being protected from spambots. You need JavaScript enabled to view it..

The technical information in this news release has been reviewed by Japan Gold’s President & Chief Operating Officer, Dr. Mike Andrews, PhD, FAusIMM, who is a Qualified Person as defined by National Instrument 43-101. 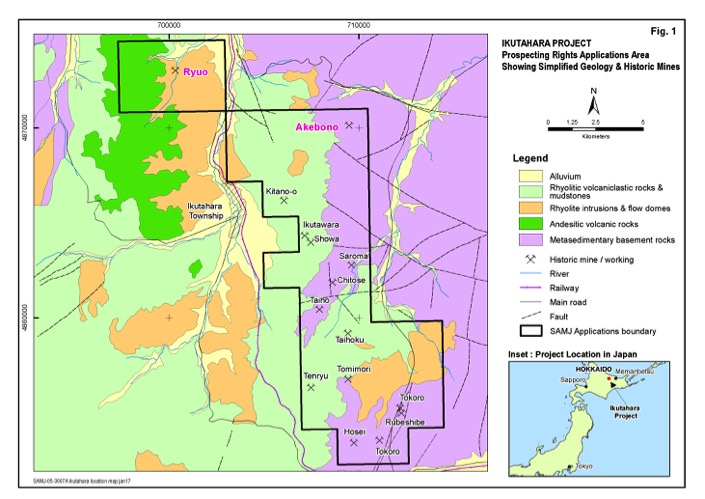 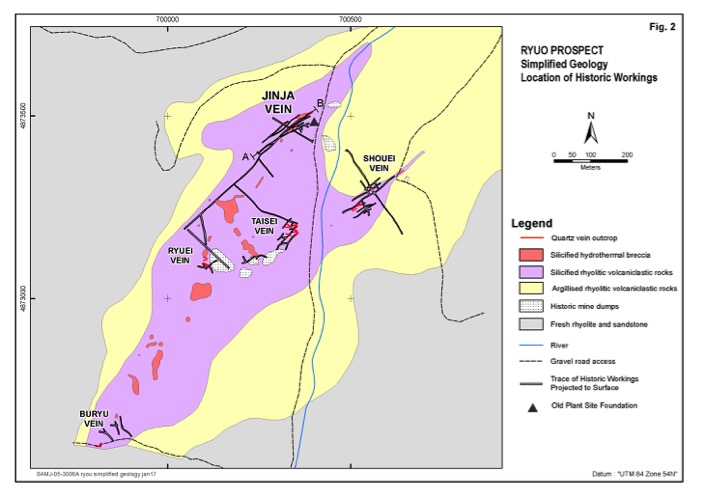 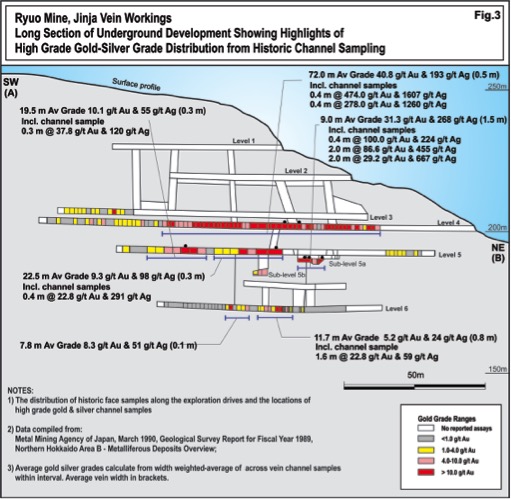 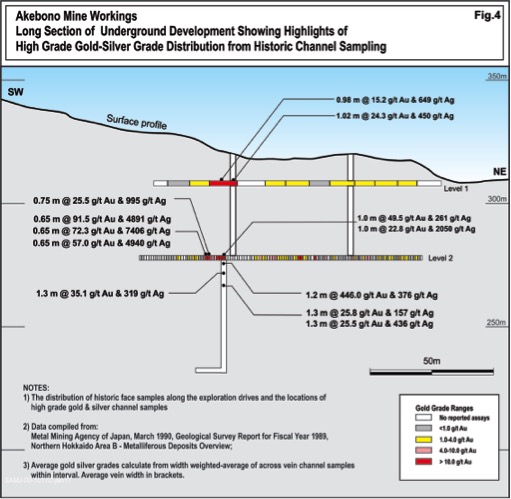